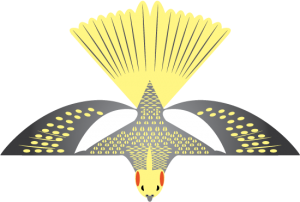 The pearl mutation, which is sex-linked, removes the melanin from the centers of all grey feathers, giving the affected plumage a “scalloped” appearance. While females retain this coloration throughout their lives, most males lose the pearl markings after their first molt, after which they look like dark normal grey birds.

This mutation can be combined with others to change the appearance of the pearl markings; a cinnamon pearl, for example, will have brown edgings on the scalloped feathers, and a whiteface pearl’s feathers will have white centers rather than yellow ones.